If you have ever had the urge to have some elephant skin displayed on your mantelpiece, Xishuangbanna is the place to go. 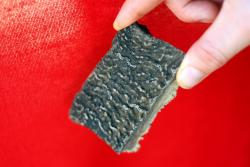 Elephant Skin: Eaten because of its sweet and salty flavour when prepared

A team of orchid researchers and I travelled southwest to the Myanmar border in December 2014 to check out some markets there. We had to leave before sunrise and travel for three hours to get to the border which was a huge gate complete with a welcome centre and bustling market. I was amazed at what could be found: fruit, tiger balm, pork belly, foreign cash, rubber seeds, and so many other items I was unable to identify.

The most exciting stall, however, was one covered in a red table cloth towards the end of the market. It took us a while to figure out what was on the table, but after asking the stall owner and roughly translating, we figured out that we were holding a lump of elephant skin. I am told, in traditional Chinese medicine (TCM), this would be ground up into a powder and used to stop bleeding, promote tissue regeneration and treat boils.

Alongside the skin was a brown sack we later identified as a bear gall bladder, and some vials which we guessed to contain bear bile. 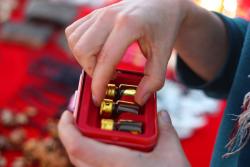 When in the west, one hears about all the amazing things used in TCM but it is astounding to actually come face to face with them. I was probably more surprised by this stall than if I had found a live elephant in the market!