Language on the mountain 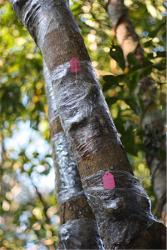 Reintroducing the Dendrobia species of orchid in the Green Stone Forest

Having the confidence to start using an unfamiliar language can be daunting. But when the only conversation available to you at the top of a mountain is Chinese, there is little to do but jump right in!

In my second or third week of residence in Xishuangbanna Tropical Botanic Garden (XTBG) I started helping the orchid group . The Green Stone Forest is one of the farthest reaches of XTBG. It consists of a few jagged limestone hills, covered in native tree species, protruding out of a sea of rubber plantation enshrouded by mist. The landscape is divided by a series of boardwalks that extend from the valley to the highest point.

Dendrobium species are in the family Orchidaceae and are important in Chinese culture for their medicinal use. But because of their usefulness they are sometimes over-harvested, resulting in a decline in the species. In this area of Xishuangbanna there has also been a huge loss of forest to rubber plantations, leaving orchids far less forest to inhabit.

Our mission is to try to reintroduce Dendrobium species into the remaining limestone forests. A process which involves sticking sphagnum moss on tree trunks with cling film, then injecting the orchid seed into the moss with an hypodermic syringe. The seeds are microscopic and the most important part of this delicate operation is that the seeds have been inoculated with a fungus which forms a symbiotic relationship with the seed and enables it to germinate. 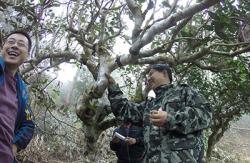 Xi Long and Shore finish planting orchid seed on a tea tree (Camellia sinensis)It is a two-person job with one holding the moss in place and the other wrapping the trunk with cling film and one person injecting while the other fills the syringes. This is all done while making sure not to let the glass jar which holds the seed roll down the slope – a crime which ends the day of fieldwork. There are two main seasons in Xishuangbanna: hot and wet and warm and dry. The moss is only used in the dry season so that moisture is retained under the cling film for long enough for the seeds to germinate. A germinating seed results in an attractive sight for tourists as well as a success for the conservation of orchids.

The team carrying out this project is all Chinese, making it an excellent opportunity to try out my meager Mandarin. The number of words I actually learnt was relatively low, however my confidence in communication felt a significant boost.

My mum used to tell me I was unable to multitask but learning a language while learning to plant orchids was not as frightening as I first thought.